The Properties of Emu Oil 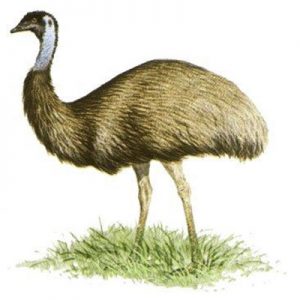 Emu oil was discovered by the Aborigines many thousands of years ago. It has been utilised in Aboriginal culture as an antiseptic, analgesic and nutrient. Emu oil was used for joint aches and pains, sunburn, as a moisturiser and to encourage skin repair.

Emu oil penetrates skin and other tissues better than any other oil known to man. Research around the world is beginning to unlock the mysteries of the oil that made it such a potent healer over the last thousand years. The oil has been used and is marketed extensively throughout the world as a natural clean beauty product for body lotions, cleansers, muscle rubs, shampoos and anti aging potions.

Emu oil has been discovered to be bacteriostatic, which means that it does not promote the growth of bacteria, it is also hypoallergenic and non-comedogenic (low skin irritation and does not clog pores). From a veterinary aspect emu oil provides a pharmaceutical free, natural option in the treatment of wounds, scar tissue and arthritic and painful limbs. There are no other comparable product formulations on the market at this time. The strict restraints in the equine field for the use of drugs during and proceeding competition mean that emu oil products provide a unique treatment regime for the equine athlete. The linoleric and oleic acid composition of the emu oil and the lack of long chain fatty acids in it’s make up are conducive to long shelf life.

Emu oil products (importantly pure emu oil is not appropriate, it must be in an aqueas cream base otherwise burning can occur); have been used in veterinary medicine in the USA and in Australia. Veterinarians have realised that emu oil products provide unsurpassed wound healing in both chronic secondary infection wound healing and in active acute infectious wounds. In short the properties of the emu oil products encourage wound healing and epithelialisaton with an anti-bacterial effect, it also breaks down old scar formation by penetrating the skin surface and promoting normal tissue formation with 15% better collagen rejuvenation.

Research has been conducted in the USA and Australia, investigating the oils beneficial effects on arthritis and joint pain and for the treatment of cancer. It has become evident that the high levels of linoleric acid and oleic acid in the emu oil have anti inflammatory effects as well as having the ability to actively transport other bioactive substances through the lipid layer of tissues such as skin and stomach wall. The research and anecdotal clinical data have provided exciting results. In Australia in 2002 the Therapeutic Goods Administration recognised Emu Oil as a therapeutic active ingredient, and listed Emu Oil on the Australian Register.

Dr M Zimmer from the USA has also discovered in clinical trials that antibiotics are carried into the deep tissue by the emu oil thus allowing deep local treatment of infected dermal wounds. This means cost effective, efficacious local treatment of wounds. In horses this is particularly exciting as the cost of many antibiotics are prohibitive and it means the most appropriate antibiotic can be used as a topical application.

Dr Robert Nicolosi, University of Massachusetts, reported on animal trials that showed cholesterol lowering, anti-inflammatory and transdermal properties of emu oil. Dr Nicolosi was selected to perform the emu oil studies because of his widely recognised publications on vegetable oil’s sterols and lecithin. He has published more than 150 peer reviewed papers in may of the noted journals on nutrition. Dr Nicolosi holds teaching and research positions at the University of Massachusetts.

He stated that ‘inflammation is easily seen but more difficult to quantify. The results were again “incredible.” The degree of inflammation was significantly reduced between 42% and 71% in the emu oil treated mice. The cytokines or those circulatory compounds produced as a result of inflammation, were also reduced significantly (-83% interleukin-1 and -66% tumour necrosis factor). Several human and animal diseases are probably the result of inflammation. These include arthritis and vascular diseases. Treatment is often difficult but topical application has been explored. Substances that pass through the skin are needed’. These trials showed statistically that emu oil is transdermal and can be utilized for transdermal delivery.