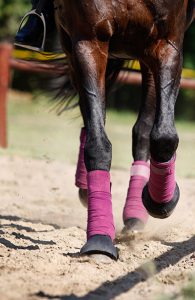 Every Step They Take

Arthritis means inflammation in the horse’s joints, this inflammation can be from any cause: infection, trauma etc. However Degenerative Joint Disease is a disorder, common in animals and humans alike usually referred to as DJD, it is often used as an overall definition for all joint disorders, although there are various forms of arthritis and different reasons for the development of such.

It is generally regarded as a non-inflammatory condition of articular cartilage and is often called osteoarthritis. There are two classifications: primary DJD- which occurs where there is no known direct trauma or disease but is typical of the joint changes in the older animal; secondary DJD- from direct trauma or infection of the joint. Secondary DJD and its inevitable progression to inefficient joints can occur at any age and several factors may start the disorder. Sadly once DJD starts, it cannot be reversed or cured. However the process can be slowed & relief can be provided that may result in a horse maintaining an active life. DJD is the number one reason for premature horse retirement, 60% of all lameness is due to DJD. Joints are lined by specialised tissue, called hyaline cartilage that is vital to smooth joint function. This cartilage can become frayed and damaged due to the mechanical wear, ultimately exposing bone and causing pain. With more chronic cases, the soft tissue supporting structures can become thickened which results in a decreased range of motion of the joint. DJD is not a condition of articular cartilage alone, the synovial membrane which lines the joint cavity, is also affected. If left unattended joints will become swollen and sore and eventually new bone is created to strengthen the surface (a process called sclerosis) and extend its margins (bone spurs and osteophytes). In its final stages, if left unchecked, arthritis causes the fusing of equine joints. The key is the extent of the progress and acting early so that it can be held at a point that the horse is pain free and still useful symptoms can be alleviated.

What Causes The Damage to the Joints?

The main cause is trauma, either a direct one off or repetitive concussive forces, the most common is the latter, that is the force up the leg from each step the horse takes. The likelihood of DJD comes from: poor confirmation, genetic pre-disposition, surfaces too hard, overworking on harder surfaces, poor shoeing, direct accidental damage to a joint, infection of a joint, puncture of a joint or old age.

How Can DJD be Avoided

So to prevent the onset of DJD, start from the earliest days and provide good balanced nutrition to maximise quality bone and joint development, before breaking in a young horse should be assessed for conformation defects. If a career is planned for racing, jumping, dressage etc., then an experienced veterinarian should assess whether the conformation is strong and correct enough for the chosen career. Over taxing an unsuitably built horse is likely to produce DJD and therefore a decision not to pursue a particular path may mean that given an easier sport, DJD and pain for the horse can be delayed or prevented. Good intelligent shoeing can assist, but a farrier should not try and correct a deviation of the leg as that will only cause stress on joints which otherwise may not be susceptible. Good support with balanced level feet and correct angles are vital to assist prevention, on the other hand, incorrect shoeing can often be a trigger. Ongoing he needs to be well shod, to reduce stress and concussive forces to the joints, shoes should be selected for the conditions of work, ie heavy road shoes should not be used unless really necessary and the horse is strong enough to carry the weight. Care with the development of the young horse, not breaking in too early, balancing the workload with the development of maturity while being aware of the type of horse and its future. Larger heavier warmbloods mature much later than thoroughbreds. Excessive workload can be a cause, but the key factor is the surface the horse is worked on, trauma from concussion is the most common cause of DJD in younger horses. The idea of trotting horses out on roads to “harden them up”, is typical of the lack of understanding of what brings a horse to an early end of its competitive life. If DJD develops, early recognition can make a big difference to preventing progression.

The Importance of the Surface Under the Horse’s Feet

The desire to have a workable all weather surface, whether it be an arena or track, that is level and firm throughout the year, has resulted in hard sand or cinders etc. being used with no thought to cushioning the strike of the leg. Many are built as though they were a road and a shallow sand surface is placed on top. To avoid impact resistance, some thought must be given to cushioning that surface if the horse is not to start the negative processes towards DJD. Overseas surfaces are inherently deeper, softer, and sand being added to rubber, soft chips, plastic, or now fibre sand is utilised. The hoof moves forwards downwards, and rapidly decelerates when brought in contact with the ground. It’s this deceleration and strike and causes the concussive effect which can be damaging to joints and bones. The term impact resistance describes the ability of the footing to absorb that concussive effect, therefore hard surfaces have high imp