What Does the Pregnant Mare Need? 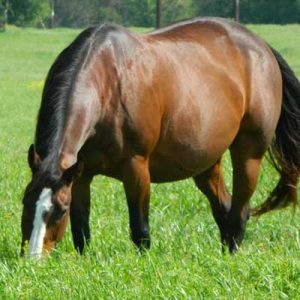 A foal needs a good nutritional start in life from three months before it is born! Without doubt, the most important period of a horse’s life is from birth through to two years of ages. During this time a young horse can reach 90% of its adult height and 80% of its adult weight. Bone mineralisation for the foal begins during the last three months of pregnancy. At this point the foetal bones are simply cartilage models of the adult bones. The skeleton of the newborn foal contains only 17% of the adult bone mineral content. Good nutrition for the foal however, begins with the pregnant broodmare.

In New Zealand the horse breeding industry bases itself on pasture farming. Spring grass is rich in energy and protein at the time of year when most mares are foaling and foals are suckling. However many of mares do not have ready access to good quality abundant spring grass at foaling time, which the unborn foal requires. Also If the mare foals in late spring or early summer the grass is of lower nutritional value.

There are two very important periods to consider – the last three months of pregnancy, -the first 3 months of lactation. For the first eight months of pregnancy the energy requirements of the pregnant mare is the same as those of a mare that is not pregnant. From nine months onwards the energy requirement increases to support the rapidly growing foetus. A broodmare can gain 50kg in weight over the last twelve weeks of pregnancy. During the final month a pregnant mares energy requirement increases to 20% above what it was at 8 months. The protein and calcium requirements also increase significantly. A mare needs approximately 1 kilo of protein and 40gm of calcium per day. This means a 550kg broodmare has to eat 30kg of pasture per day to fulfill her energy requirements. This amount of pasture while comfortably meeting her protein requirements will only just manage to meet her calcium requirement. (Good quality Spring grass is around 25% protein, and contains approximately 1.4gm calcium/kg). An intake of 30 kg of pasture per day is only possible where there is an abundance of spring growth. In a lot of situations intakes of 30kg per day is not possible, either is just isn’t enough grass or the mare is foaling after the spring growth has slowed down.

What Does the Lactating Mare Need?

Lactation places the greatest nutritional demands on a broodmare. Lactating mares need as much energy in their diets as that of a racehorse in full training. The amount of energy in the diet influences the amount of milk a mare can produce. Because foals initially rely on mothers milk as their only source of energy, protein and minerals. The mare’s energy intake is therefore a very important factor. It directly influences how well a foal will grow during the first three months of its life. A mare in early lactation produces between 15 and 20 litres of milk per day. To be able to do this she needs 70% more energy in her diet than she did at eight months of pregnancy and 40% more than she did during her final month. Her protein and calcium requirements increase by 50% to 1.5kg and 60gms per day respectively. A lactating mare needs to consume 45kg of pasture per day (8% of her bodyweight). Even under ideal grazing conditions, intakes of this magnitude are not possible. Unless additional energy and mineral sources are fed, the lactating mare will rapidly deplete her body fat reserves and start mobilising calcium and minerals from her bones. 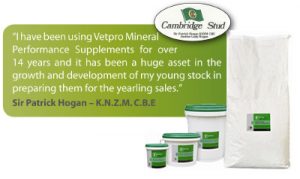 This is even more important when mares foal after the spring growth period and have to graze summer grass while lactating. Summer grass contains less energy than spring grass, making even less energy available to the mare for milk production. Summer grass is also lower in protein than spring grass and mares will quickly become protein deficient and have to start drawing on body protein reserves. There are several alternative energy sources that can be used ranging from straight grains through to complete broodmare premixes. The easiest and cheapest energy source to feed is oats. Oats have an energy content of 3.0mCal/kg, up to 6kg per day may need to be fed depending on the quality and quantity of pasture available. A supplementary protein source is necessary if the mare is grazing mature summer grass with minimal new growth. Lucerne Chaff, soya bean meal and milk powder are all high quality protein sources that can be fed along with the oats. Alternatively the commercial premixes available for broodmares all contain high quality protein. However it is important to feed the amount recommended on the label in order to achieve the optimum energy and protein levels. Also a good mineral supplement formulated for broodmares should be added to provide  additional calcium, phosphorus and trace minerals such as copper, zinc, manganese, iodine and selenium. These minerals are essential for growth and development of the foals musculo-skeletal system. The requirement for each of these increases with pregnancy and lactation.

What Minerals are Needed for the Lactating Brood Mare?

The mineral content of milk is highest during the first week of lactation and then declines steadily. If the mare’s calcium intake is not adequate during gestation and lactation, it will result in skeletal mineral loss in the foal. Foals born of calcium deficient mares have smaller cannon bone diameters at birth. Calcium and phosphorus are the main minerals found in bone. Daily requirements are dependent on growth rate. A six month old weanling gaining 0.65kg/day requires approximately 38g calcium and 25g phosphorus/day. A 12 month old yearling gaining 0.5kg/day requires around 45g calcium and 30g phosphorus. Lucerne hay is the best feed source of calcium containing around 12g/kg while grains are the best source of phosphorus (3.0g/kg). Bran contains high levels of phosphorus but only 20% is available for absorption. The ratio of calcium to phosphorous is just as important. Diets should contain ratios of between 3:1 and 1:1 calcium: phosphorous. Studies have shown that high ratios of around 6:1 fed over a long period resulted in reduced bone density. Inverse ratios can also have a detrimental effect. These can occur on high grain/low lucerne diets. Studies have shown that feeding extra calcium has no effect on bone density.

Silicon is one of the most common elements on earth and is essential for normal body function. Most of the silicon found in nature is in a form of sand and is unable to be absorbed by the body. Plants can take silicon up from the soil consequently the forage and grains that horses consume contain small amounts. Silicon is involved in the formation of the collagen matrix as well as bone mineralisation. Experiments on chickens fed silicon deficient diets resulted in lower bone collagen levels, resulting in abnormal bone growth. 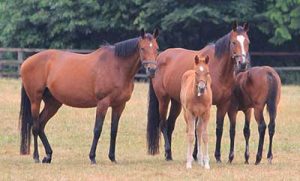 The same series of experiments also showed that silicon supplementation increased the rate of bone mineralization as well as increasing the glycosaminoglycan levels in cartilage, important in the prevention and treatment of degenerative joint disease. Studies carried out at the University of Texas demonstrated the importance of silicon in maximizing bone density in young racehorses. In these studies horses on silicon supplemented diets were able to train and race for longer and sustained less bone injuries than non supplemented horses. This was attributed to an overall improvement in bone density. It was noted that silicon supplementation had no effect on growth rate therefore was not connected with any risk of growth related diseases like OCD. The studies also showed that if an absorbable form of silicon is given to lactating broodmares the levels in the milk increase which results in more silicon available to the foal. Interestingly human studies on milk mineral composition have shown that zinc, copper, iron and silicon are the trace elements found in the greatest concentrations during early lactation. As lactation advances, zinc, copper and iron levels decrease while silicon stays the same.

The Special Need for Vitamin E in Breeding Horses

With regard to breeding animals, scientific study (Hoffman et Al 1999) showed that Vitamin E is easily transferable and mares that were supplemented with Vitamin E showed increased passive transfer of antibodies to foals, which greatly enhances the immune system. It also showed an advantage of feeding Vitamin E during late gestation and early lactation; and that serum and colostrum IgG levels were greater in mares supplemented with Vitamin E. The foals from all mares had similar levels of IgG, IgA, and IgM at birth prior to nursing. After nursing, foals from mares fed the high level of Vitamin E were found to have higher serum levels of IgG and IgA, which were reflected in the dam’s colostrum. It has also been suggested (Harper, 2002) that mares known to have poor-quality colostrum, or that had foals with failure of passive immunity transfer in previous years, should be supplemented with twice the Vitamin E normally fed for at least a month before and after foaling. It was also recommended that pregnant mares fed lower quality hay should be given Vitamin E supplementation a month before and after foaling.

In summary, even if your mare has access to good spring grass she will need extra protein and mineral balances to grow a healthy foal without drawing on her own body reserves. Make sure you up the feed intake in the last three months of pregnancy and first three months of lactation.