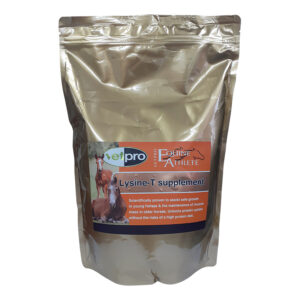 Protein is a vital requirement for all horses, the demand is greatest for the growing horse and the late trimester mare, and the least for the spelling horse, with performance horses in-between. Protein is utilised in the tissues of the horse, predominantly the muscle, blood, organs and skeleton, but  also needed for hormones, enzymes, antibodies and other body functions.

Protein is made up of amino acids – 22 of them – of which many can be made within the tissues of the horse, but the rest need to be provided in the feed and are usually all readily supplied by a basic diet, except possibly lysine, which can be lacking in many  foodstuffs. Lysine is the first limiting amino acid in the horse and threonine the second. A limiting amino acid is described as one, that if not present, will prevent protein from being made even if other amino acids are present in adequate quantities. The amount of protein in a diet has to be assessed as underfeeding (especially the growing horse) has negative consequences for the development of the structure of the horse; however overfeeding has negative consequences too for all horses, some of these effects will be highly detrimental to the young developing horse. Generally in New Zealand protein is most commonly over fed, deficiencies are rare in managed horse care.

How Much Protein Does a Horse Need?

Measuring the amount of protein is sometimes confusing with feed labels stating a crude protein (CP) figure as a percentage of the feed, the digestible protein (DP) is the actual relative amount that the horse takes into the system and that is quality protein. The usability of the DP is affected by the quantity of the limiting amino acids. The actual quality of the protein is determined by its amino acid composition. There are many attempts to work out an equation to provide the ratio between DP and CP. These measurements require faecal testing and a scientific input, also the results vary according to the composition of the actual feed and forage ratio, studies show that quality protein (DP) is greater in grain diets than forage. DP is always lower than the CP and so when assessing total protein check whether figures are CP or DP, and allow for a higher % need of protein if the horse is predominately on a forage/pasture diet.

Protein is measured in tables in grams, but the details on the feed labels are often in %. Remember this is the CP% of that particular feed and, since it is invariably mixed with other feeds in the diet, it is not the overall % of protein in the horse’s diet. If a feed states a protein level of 14% it does not mean that the horse is getting an overall 14% protein content. The true answer  is about the quantity and the mix of the feed intake.

The NRC is an internationally recognised institution that provides data on feed requirements for horses. One of their tables shows the CP in grams required by various types of horses.

To consider how much protein to feed, first of all look at overall feed total intake as shown below:

Therefore a lightly worked 500kg horse should consume at least 8kg of feed forage (at least 65%) and concentrate feed (35%). A lactating brood mare should intake 11.5kg in the first few months and 50% forage and 50% concentrate. So just for a simple example let’s take a light working horse:

The minimum level of lysine should be about or above 4% of the total CP intake, especially for growing horse’s diets. The lysine in the feedstuff may be assessed if they are feeds with full labeling. Consideration should always be give to the lysine content when calculating the protein intake, too low and the protein differential between CP and DP is much greater, so less quality in the final percentage. As stated above the protein requirement will increase under various demands, in order to provide for that increased need all that is necessary is to feed more of the full diet, not increase the % protein in the diet. Balance, as always, is the key to good nutrition and therefore health and the ratio of fat – carbohydrate – protein is an important balance criteria which must be kept.

Too Much Protein is not Good for the Horse

The negative effects of over feeding protein to young horses has been scientifically studied and findings indicate potential blood insulin levels become too high, negative bone disorders can occur and they have suggested that even in growing young horses it is more advantageous to reduce protein when the diet is proportionately supplemented with lysine and it will still support maximum growth response. There is a lot of science data on the dangers of too much protein: Actual results (E.A. OTT et Al) shows that reduction of concentrate protein and subsequently the feed intake of the animal, decreases the blood insulin concentrations which may be advantageous in helping minimise bone development problems.

“There is no question that gross overfeeding of high protein grain feeds will help precipitate DOD in susceptible horses” (L. H Breur KER Library). Growth of Thoroughbreds (W.B. Staniar et al) horses fed a low protein intake but fortified with lysine and threonine concludes that fortifying the diet with lysine and threonine, improves protein quality and enables full realisation of genetic potential for growth, while raising horses on forages with a lower protein concentration. Other science has been carried out on the higher heat production from high protein levels. Horses in work and strenuous exercise may benefit from lower protein concentrate and lysine threonine supplementation. As heat production from higher levels of protein may interfere exercise by attenuating fatigue (Kronfeld) and an increased acidity will interfere with glycolysis and muscle fibre contraction (Mainwood and Reynaud) i.e. restriction of dietary protein may be beneficial during strenuous exercise by diminishing production of heat and acid (P.M. Graham-Thiers et al). Excess protein may be utilised as energy but this produces blowing and overheating. The Urea levels in the blood increase leading to greater urea excretion into the gut which increases the risk of gut disturbances and enterotoxaemia. Also it causes increases in blood ammonia creating nerve irritability edgy behaviour, plus disturbances in carbohydrate metabolism (Pagan). An indication of high protein in stabled horses is the ammonia smell in the bedding. This too can create respiratory issues from the stabled horse. There is evidence that over developing the muscles has a binding effect on them – a good analogy is that of the body builders who make themselves looked bulked for competition but in no way could work as an effective athlete. Horses overfed protein, or unnecessarily given protein supplements in the hope of increasing growth rate or obtaining a muscled-up look, are in fact in danger of all the above-mentioned issues.

Summary on Protein in a Horse’s Diet

Clearly it is necessary to have sufficient protein especially for the growing horse and those in hard work including lactating broodmares. However underfeeding protein is rare in New Zealand and more direct problems occur with too high a level of protein especially if a direct protein supplement is given over and above normal feed. If a horse is on only poor forage then an increase in quality forage such as Lucerne or the addition of a little grain will suffice. However there is so much scientific data to show that to provide sufficient quality protein it is much better for the health of the horse to add the limiting amino acids to the diet, ie Lysine and Threonine, than to give large feeds especially of grain. Young growing horses are particularly vulnerable to bone complications if the protein percentage is too high.

There is no substitute for a balanced diet and horses in poor condition are healthier if they improved by a regime containing a higher fat ratio than too high a protein level. Once the energy portion of the fat has been utilised the rest will create condition. That is another article : “Energy- What, Where, How”.