Details
PrevPreviousCare of the Orphan Foal
NextEnergy – What, Where, HowNext

What is Selenium? Is it Good for a Horse or is it Toxic?

Selenium is an essential trace mineral and like a lot of essential nutrients, a small amount does a lot of good but it doesn’t mean that more will do more good, in fact too much is actually toxic. Overdose of selenium causes the effects that were originally called “alkali disease”. On the other hand selenium deficiency has been shown to create white muscle disease. Selenium is an essential component of the enzyme glutathione peroxidase, one of the body’s natural anti-oxidants. As an antioxidant it protects the cells from damage by the waste products (known as free radicals) of cell metabolism. In particular selenium destroys peroxides and prevents them from causing a loss of cell membrane integrity.

There is also a link between selenium and muscle integrity separate from its anti-oxidant properties. It is used in conjunction with vitamin E to help prevent muscle disorders such as tying-up in some horses. The link between selenium and vitamin E is interesting in that if one is deficient it can be compensated for by an adequate supply of the other. Vitamin E in the cell membrane will reduce the formation of lipid peroxides, selenium in the cell fluid will remove any that do form. Low vitamin E means selenium is needed more to deal with the peroxides and the contra is true. Selenium is also necessary for the development of the acquired immune system.

Why do Some Horses Need Selenium and Some Not?

Many areas have sufficient selenium naturally available in the soil and hence it transfers to the horse via the grass intake. However there are large areas of New Zealand soils that are deficient in selenium so soil testing is useful. If the soil is low supplementation will be necessary, either directly to the horse or by adding to the soil, often called prilling. However it is very important that organic or inorganic selenium is never given to a horse without firstly having a blood test carried out by a veterinarian.

What Are the Symptoms of Too High or Too Low Selenium 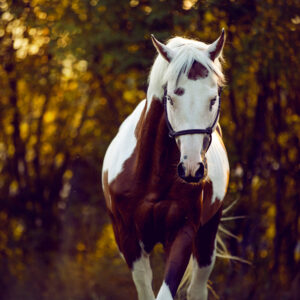 Some symptoms of high or low levels are similar in that the attitude and behaviour of the horse is affected mainly due to pain and discomfort. But in particular low selenium will affect the efficient function of the horse’s muscular system. Horses with low selenium exhibit negativity to being ridden or worked, over reactive to stimuli, “hot” and difficult with lowered performance. Internally low levels result in inadequate antioxidant levels with initially mild symptoms that include the horse being stiff and sore after exercise and prone to infections, from a depressed immune system, also possibly prone to tying up syndrome. Continual of low levels will be seen in poor hair and coat, muscle inflammation, weak pale muscles (white muscle disease).

In breeding horses, low selenium can be a cause of low fertility, the most severe problems are seen in newborns and can be fatal. More intense symptoms include the development of myopathy (white muscle disease), impaired movement, difficulty in suckling and swallowing, respiratory distress and impaired heart function.

With performance horses, they have high energy demands when they are training and competing. During exercise, muscle cells require antioxidants that need elements such as selenium to deal with free radicals, the by-products of muscle energy use. The higher the workload the more antioxidants are needed. A performance horse deficient in selenium is at risk of muscle damage created by free radicals leading to muscle pain and stiffness and slow muscle recovery following strenuous exercise.

Symptoms of too much selenium include gradual weight loss, a loss of hair from the mane and tail and a break in the hoof wall at the coronary band. The changes to the feet can cause a lameness similar to that seen with laminitis. Acute poisoning occurs when large amounts of selenium are ingested over a short period of time, signs involve most of the body systems and death usually results. There have been cases in New Zealand where the person feeding the horse has not understood the need for correct dosing, especially when using the inorganic liquid selenium, and inadvertently overdoes resulting in tails falling off, feet totally breaking down to the point where some horses had to be put down.

How to Supplement Selenium

As discussed supplementation should never be given with first obtaining a blood test, a horse may even exhibit the same behaviour symptoms if they are high or low in selenium, however since over supplementing selenium can be toxic, it is important to accurately know the levels in the horse’s system.

The blood test should be repeated at regular intervals on a horse receiving supplementation. A horse that is high will need an assessment of the soil and how much selenium is already in the feeds and supplements, particularly since some premix feeds may contain it. If necessary it may mean finding alternate grazing that has not been prilled with selenium.

Horses require between 1-3mg of selenium on a daily basis, even 2-3 times the required daily amount over a long period of time, will cause chronic selenium poisoning. Selenium can be administered either in a liquid inorganic form, or in a organic (chelated) form. The latter is by far the preferred option, as the liquid form is only a tiny dose, given once a week or once a fortnight and that is difficult to measure and also to remember if more than one person is responsible to administering. There is another source of selenium  as a combined form as sodium selenite. This is found in many standard mineral supplements and will provide a small daily amount for horses that are on normal soils and are therefore neither low or high in their blood levels. It is just a daily maintenance amount.

Vetpro’s Selenium-K is a powdered chelated (organic) form of selenium. A daily 15gram dose provides 1.66mg of available selenium. It is safer and more convenient to use a daily dose of Vetpro Selenium-K as the 15gram daily dose is exactly one scoop, whereas using selenium in the liquid form of the 5mg per ml concentration, you may have to feed a daily dose of only 0.33ml, which requires very careful measurement, even a weekly dose of 2ml also requires great care and management hence there is a real vulnerability to creating a toxic overdose.