PrevPreviousWhat Supplements Do Your Horses Really Need Each Day
NextVitamin B1 – Thiamine. What – Why – HowNext 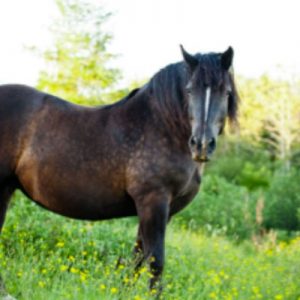 Aside from the obvious physical issues of too much condition affecting movement, respiratory stress, joints etc, the biggest issue on the horses physiology is the onset of metabolic problems from excess blood glucose and insulin: such as insulin resistance, laminitis, endocrine complications such as Cushing’s disease or Equine Metabolic Syndrome (EMS). The link between all of these is obesity, which is why it is vital to recognise the onset of too much condition and deal with it quickly. Adipose (fat) tissue is an active endocrine organ and when they are in excess they secrete body chemicals that impair insulin signalling within fat and muscle so that insulin resistance develops. Insulin is an anabolic hormone produced in the pancreas and is important in the regulation of fat metabolism. When a horse ingests glucose (from grass and carbohydrate feed), insulin is released to control the amount of glucose in order to maintain normal levels in the blood. With an overload of fat cells in the body, the natural control of glucose is reduced and hence insulin resistance begins. In horses, the particular condition is called compensated insulin resistance, a direct result of ingested carbohydrates and is not the same as the human condition of poor glucose control which occurs when the pancreas does not produce enough insulin and it becomes type 2 diabetes. Horses do not suffer from that. EMS is also a direct result from compensated insulin resistance.

Laminitis is a constant concern for overweight horses, more especially ponies, and can be an added complication with EMS or as a stand-alone result of high carbohydrate intake and overweight condition. Conversely a history of laminitis can predispose an animal to develop EMS when insulin resistance develops.

Cushing’s disease is known as pituitary pars intermedia dysfunction, shortened to PPID. As the names suggest it is a condition of the pituitary gland which produces a hormone known as ACTH. This in turn stimulates the adrenal gland to produce the hormone cortisol. When cortisol is not well controlled due to malfunction of the pituitary gland, the levels are elevated this in turn elevates blood sugar (glucose). So here again insulin resistance occurs as the levels of glucose are too high for the amount of available insulin. With PPID the high cortisol levels can develop from a tumour on the pituitary gland, or from prolonged stress which can be from many years and many factors. This is why it tends to develop in the older horse and a horse with PPID can become very overweight or underweight. The clue to this disease is the development of a very curly coat, starting with the legs.

Feeding starch to a horse with Cushing’s is also inappropriate because of the inherent insulin resistance. Testing for insulin resistance and diagnosis of EMS, Laminitis and Cushing’s Disease will need to be carried out by a veterinarian. All obese horses should be screened for EMS.

The link with the development from just being overweight to insulin resistance, EMS, Laminitis and onset of Cushings is the intake and digestion of starch, whether from carbohydrate feeds or sugars in the pasture and hay. The problem with overweight horses and ponies is that while they have health complications from their condition, it is counterproductive to actually starve them as that will create other negative complications will occur from that as well as impacting on the overall wellness and health of the horse, it is a slow process to reduce weight (don’t we humans know!). Starving a horse will create binge eating when he gets out to the paddock and that will cause a sharp rise in insulin.

Analysing that your horse is tending to be overweight and taking control at an early stage is vital. A horse that is carrying obvious fat on the body, pouches on the rump, ribs out of sight and hard to feel, wobbly crest on the neck is overweight.

How to Measure Body Condition:

The immediate action is to stop feeding, sounds obvious – you cannot feed a fat horse. However it must have fibre in the form of forage or chaff, chaff mixes without grain. Grazing is vital as any horse needs to be putting though food into the stomach to switch off the constant flow of stomach acid. Note though, it needs to be low sugar pasture, which means long rank grass, it is a common misunderstanding that short grass is best – not true because the highest concentration of sugar is closest to the ground. Poor weedy pasture is not good as weeds can have high sugar levels. Penning them for part of the day with hay is a good option, little and often and it must be washed thoroughly and drained as a lot of the sugars are soluble and therefore will be removed when the hay is thoroughly washed and the water removed by hanging up the wet hay in a net because the water will contain the sugars. Note Baylage /Haylage is not suitable for these horses as the nutritional content is much higher and horses tend to gorge on it. They will need a daily fully formulated mineral supplement and in hot conditions electrolytes. If pasture is restricted then add Vitamin E. Ideally a small handful of beet (no grain variety) and Lucerne chaff (this is the lowest sugar level fibre) with supplements will be keeping their basic diet balanced, avoid premix bagged feeds.

The effect of pasture providing too much sugar can be alleviated if you consider not only the type of pasture, but also when the horse is allowed out to graze. The grass uses sunlight in the a day and with that it creates sugar from nutrients in the soil which it uses to create growth. Grass stores the sunshine effect (photosynthesis) and the nutrients all day and then at night converts the stores to sugars which it then uses to grow. Grass grows at night so in the morning sugar is depleted. Cold temperatures slow growth so sugars are then stored. So it is important to bring the horse in before late afternoon when the storage is high but not yet used. Turn out in the morning, but if it is cool or even frosty, wait until it warms up.  If sound they will need slow exercise to begin with, increasing in exertion on a planned programme to create fitness before major exertion is asked for. Letting them out into the paddock is important as it adds to the exercise, penning time must be limited.

With Laminitis an experienced farrier will be needed to correctly and regularly trim the feet, this can considerably alleviate the soreness. Special rocker bar shoes are an option. Keeping the feet cool by standing in a stream, mud or cold water came also assist. It is important that the horse be out and encourage to walk around, boxing on warm bedding is not suitable. Controlling grazing with strips of electric fence can limit grazing but it may lead to binge eating. A grazing muzzle is also an option.

Spelling horses and ponies need to be checked for signs of getting fat and not left until they are required to start work again with the thought that the weight will drop when they do, it could well be too late to turn back the onset of serious complications.

Science has shown that supplementing horses with enzymes such as Beta Glucanase and Alpha Amylase to assist in digestion of starches and sugars and also with MOS (mannan-oligosaccharides) can assist with conditions of complications of sugar and starch intake. This type of supplement helps the horse to process the starches and sugars efficiently, reducing the negative effects such as hindgut fermentation and often hyperactive or negative behaviour. Read about Vetpro Digest-Rite.

Chromium has also been suggested to improve insulin sensitivity by altering the intracellular pathways (Hummel et al 2007). According to B R Rush Kansas State College of veterinary Science, “dietary supplementation with chromium (5-10mg/day) will improve peripheral insulin function and glucose tolerance. Serum glucose and insulin concentrations may be reduced, potential to normal values, weeks to months after initiation of exercise, dietary management and dietary chromium supplementation.” Read about Vetpro Chromium Plus.

New developments in the scientific testing of the use of short-chain fructo-oligosaccharides (scFOS), a prebiotic, indicate that they not only counter digestive stress in horses, but actually stimulate the growth of beneficial bacteria in the gut. It has also been shown to increase insulin sensitivity in obese horses (Respondek et al 2011), thus is of assistance in helping to prevent the negative progress in obese horses to insulin resistance and EMS and possibly Cushings Disease. Read about Vetpro Gut-Biotic.

So early intervention, correct feeding and supplementing with a dietary assisting products can all help to prevent or alleviate difficulties for horses tending to be overweight.