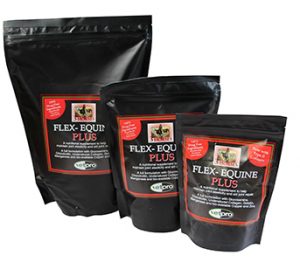 Situated midway between the stifle joint and the foot in the hind limb, is the hock, one of the hardest working joints in the equine body. It is also one of the most complex – comprising six bones making up four individual joints, all held in place by numerous ligaments and joint capsules

The largest joint of the four is the tibiotarsal joint – the articulation between the tibia and the talus. The three smaller hock joints in descending order are the proximal inter-tarsal, distal inter-tarsal and tarso-metatarsal joints.

For all practical purposes, the hock works as a hinge, moving by flexion and extension through one plane. Practically all of the movement occurs in the tibiotarsal joint. Movement in the other joints is minimal, restricted by the shape of the articular surfaces of the bones themselves, the collateral ligaments and the strong fibrous joint capsule. A special anatomical arrangement exists between the stifle and the hock, which allows them to work in synchrony with each other – when the stifle flexes, the hock flexes, when one extends, so does the other.

All equine disciplines require full and free flexion of both the stifle and hock joints to achieve effective hind limb propulsion. Whether it is the acceleration necessary in racing or the collection of dressage, the hock is the pivotal hind limb joint. Even at slow gaits, huge stresses are placed on the hock. Although the hind legs are not subjected to the same concussive forces of weight bearing as the front legs, the loading on them during movement is still significant. Shock waves travel up the limb and through the bones, ligaments and joint capsules that collectively make up the hock. In addition, the break over phase of the stride produces a rotational force (torque) that is also absorbed by the structures of the hock. The absorption of these forces is the reason why the hock is the most common site in the hind limb of work (stress) related injuries.

In assessing conformation, it is important to view a horse standing square, on an even, flat surface. From the rear view, normal hock conformation should feature a straight axis through the tibia (gaskin) and cannon bone, with no deviation at the hock. Bearing in mind that most horses ‘toe out’ slightly behind, it is easy to get the wrong impression of them being cow hocked. From the side view, normal hocks feature a vertical cannon bone with an angle to the tibia of close to 150°.

Cow hocks are a common conformational fault. When viewed from the rear, there is a deviation at the hock from the axis of the gaskin to the cannon bone. This conformation puts additional stress on the medial structures and predisposes those horses to bone spavin (refer later).

Sickle hocks are less common but when they do occur they usually place strain on the plantar ligament at the back of the hock, resulting in a condition commonly known as a curbed hock (refer later).When viewed from the side, sickle hocks feature the cannon bone angled forward from the vertical axis.

Straight hocks occurs when a horse has very little angulation between the thigh bone (femur) and the tibia (gaskin). Good hock angulation is a desirable conformational trait in all horses. Straight hocks prevent a horse from reaching as far forward with the hind legs during propulsion.

Bowed hocks are the opposite of cow hocks. They are not a common conformational fault but when they do occur they put excessive strain on the outside structures of the joints.

Hock lameness occurs when the stresses placed on the hock joints produce inflammatory changes which interrupt normal structure and function. The initial signs of lameness can be so subtle that they are often not seen as being related to a hock problem. Usually the first noticeable sign is stiffness associated with muscle soreness in the lumber region of the back. Poorly trained chiropractors (of which there are many) earn a good income from telling owners their horse’s ‘back is out’ when in fact they have a simple secondary muscle soreness from a primary hock problem. Because the lumbo-sacral joint in the lower back flexes in unison with the stifle and hock joints, any restriction in the mobility of the hock will affect the lower back as well.

Another consistent early sign of hock lameness is pain around the head of the medial (inside) splint bone. Because it contributes a large weight bearing part of the tarso-metatarsal joint, excessive strain on the joint will produce referred pain in the upper part of the ligament of the splint bone. The test to detect this pain is known as the ‘Churchill Hock Test’ named after veterinarian who first showed the pain to be a consistent early feature of hock lameness.

There are several specific hock conditions that are worth mentioning.

This is another colloquial term used to describe a distension of the joint capsule of the tibiotarsal joint. It presents as a soft fluctuating swelling on the inside front aspect of the hock, with another smaller swelling slightly higher on the outside. If finger pressure is applied to either one of these swellings, the other can be felt to enlarge.

Although the name implies a specific hock condition, bog spavin should be treated as a symptom of an underlying hock problem. More often than not, such problems are nothing more than a slight strain of the joint capsule with mild inflammation but no associated lameness. Occasionally there is a more serious joint problem and lameness, that requires veterinary attention. Osteochondritis dissecans (OCD) is a common cause of bog spavin in young horses.

This is another colloquial term used to describe a distension of the joint capsule of the tibiotarsal joint. It presents as a soft fluctuating swelling on the inside front aspect of the hock, with another smaller swelling slightly higher on the outside. If finger pressure is applied to either one of these swellings, the other can be felt to enlarge.

Although the name implies a specific hock condition, bog spavin should be treated as a symptom of an underlying hock problem. More often than not, such problems are nothing more than a slight strain of the joint capsule with mild inflammation but no associated lameness. Occasionally there is a more serious joint problem and lameness, that requires veterinary attention. Osteochondritis dissecans (OCD) is a common cause of bog spavin in young horses.

This is a distension of the tendon sheath that encloses the deep digital flexor tendon at the back of the hock. While not essentially a condition of the hock joint, it has a similar appearance to a bog spavin and therefore, needs to be distinguished from it. The swelling associated with thoroughpin is higher up and further back than a bog spavin and may be pressed from inside to outside and vice versa. Thoroughpin does not usually cause lameness and is generally regarded as of little significance.

The plantar tarsal ligament is a broad ligament that runs down the back of the hock. Sprain of this ligament is not uncommon particularly in horses with sickle hock conformation. Although the ligament appears swollen and is usually painful to the horse when palpated, lameness is not usually a feature.

Kicking out at either stall walls or float doors can cause a haematoma on the point of the hock. Blood accumulates beneath the unbroken skin and can take several weeks to dissipate. Drainage should be avoided because of the complications that can result.

An infection in the tibiotarsal joint can have a similar appearance to a bog spavin. The difference is, the horse is usually acutely lame. Often there is an obvious sign of a puncture wound however this may not always be the case, particularly in foals. This is a potentially crippling condition that requires immediate veterinary attention.