Left: Dust and moulds can irritate the eyes.
Right: An example of equine hives.

So out of the blue your horse has developed some unusual reactions either on their skin – lumps or itchy areas, or their eyes and nose may have a clear discharge- they may cough or breathing may be noisy. These may be Allergy symptoms.

Firstly it is important to assess that they are not the result of bacterial infection or reactions to parasites, or illnesses or viruses that create similar reactions, for example a respiratory virus. All those have a limited life and have medications available to assist. An allergic reaction is a different and difficult problem for the horse owner, can be quite frustrating and also debilitating for the horse. Normally, healthy horses have antibodies that can challenge the allergens and irritants that are around them all the time, however at some point the immune system becomes hyposensitised to these allergens and a reaction is set off whereby an overabundance of antibodies are produced, these then release a flood of prostaglandins, histamines etc. The symptoms we see are actually the reactions to this rush of antibodies and the subsequent response. Once this process has been triggered the horse tends to react even more easily with each exposure and symptoms become more intense. There is no known reason for this, it is not an aspect of breed, age, gender etc. The common signs are either skin reactions – lumps, heat, itching; or more often in New Zealand, the respiratory system is affected, with runny noses (clear discharge) inflamed nasal passages, cough, runny eyes, head movements (mainly from the irritated nose), puffing and generally under par in themselves. There are many triggers and it would seem that it can either be a particular new antigen or the collective effect of too many types that then get over the top of the horses natural protection. Examples are dust, hay spores, moulds, some foods or supplements, insect bites, even sunlight, sometimes treatments for other problems can create a trigger of a new allergic reaction. Horses that are in poor health are likely to be more vulnerable.

Allergies Affecting the Skin of the Horse

These are most often seen as lumps, sometimes hot and itchy. These often pass once the cause has gone, for example there may have been an eruption of a certain insect that bites and that while they cause a direct skin reaction, the saliva can also create an allergic reaction. It is rare but equine skin reactions can be from a food trigger. The bumps may run together to form welts but they often disappear after a short time. However it is important to try and relieve the itching quickly as scratching may result in an infection and then the result will have to be treated as for a wound. They can be eased with an application of cool gel, maybe a herbal anti-inflammatory or an anti-itch cream. It is better to try more natural responses initially than drugs as these may create side effects and stress the immune system. Of course if the skin reaction is not resolving quickly then a veterinarian will have to assist with stronger remedies. The best option is to provide good insect protection by way of  non chemical repellent, or washes. An old fashioned wash for an insect infestation is to use one part Ivermectin to 3 parts water and rinse the horse with this each day for 2-3 days.

Other skin triggers can simply be products that in most horses are fine but in your horse he reacts – usually easy to identify and solved by not using that product eg. a certain detergent used in washing a saddle blanket, or even a particular fabric in a rug or saddle blanket. Skin tests are available to try and identify the allergen or allergens, often a combination. Once identified prevention is the best option.

Allergies Affecting the Respiratory System of the Horse

This allergic reaction is sometimes called heaves or RAO recurrent airway obstruction as the internal swelling narrows down the airways- similar to asthma in people. Common signs are a clear runny nose, sometimes just a light clear trickle which when tested  has no bacteria – (unlike infectious discharges linked to respiratory illnesses). Coughing and wheezing may or may not be present, often the eyes are runny and in extreme cases the horse may start head shaking. Prime causes are spores from dust, hay, some grasses, some pollens, moulds and fungi. Protecting your horse from as many of these triggers as possible will help but spores and pollens in particular can travel long distances. Respiratory allergies are debilitating to the horse and will affect performance and often attitude to training.

Finding the Cause of the Allergy 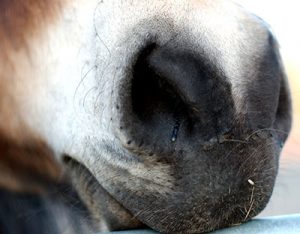 The owner knows the horse best, so observance is vital. In both cases (skin and respiratory) finding the cause is helpful so that with a change in the management of the horse, it may be eliminated. As well as skin tests some note keeping and detective work are very important. Does it happen at the same time each year? Are other horses affected? What are the symptoms each day.

With skin allergies check for insects and bites, eliminate all products applied to the skin, saddle blankets, wraps etc. and introduce them back one by one. The cause may surprise you, it could be quite innocuous in other horses but not for this one. Feed testing is just the same, start from scratch and gradually reintroduce each foodstuff and supplement watching for signs to worsen. Feedstuff allergies can stem from breathing in spores from the feed or within the gut itself as two thirds of the immune system is contained in the walls of the intestines. Taking the horse to another place for a while may help pinpoint that it could be the local trees , or a neighbours sprays.

Achieving a Resolution of the Allergy

The solution is to remove the culprit or culprits. Firstly direct good management of never having horses in a dusty or mouldy environment, scrupulous cleaning of feed bins and managers. Not using strong chemicals. Damp all feed and wash hay, damp bedding. Keep the horse out in a fresh air environment. Even though spores may not be the actual trigger, all moulds, dust and spores are irritants and so can exacerbate the response to an allergen, or prevent or slow down recovery. Sadly some trees may affect the horse when pollens are let go and then it’s either remove the horse from the area while this happens or clothe him and use a nasal cream as a block to inhaling the pollen. Corticosteroids and other drug therapies are available from your veterinarian, they can ease the symptoms to give the horse some relief but are not a cure, nor are they a long term solution. They can create new problems for the horse, for example laminitis can be a result of long term use.

The other option is to help the immune system and some good results have been seen with a boost of vitamins C, A and D plus a product called rutin – a flavonoid. While not purported to be a cure – it can provide a natural aid to the horse to increase his own ability to challenge the antigens. There is also some evidence that feeding a oil product such as flax oil or rice bran does assist to reduce the inflammatory reaction. There is a limit to the amount of liquid oil that can be fed daily but stabilised rice bran will provide a good source of omega 3 in a palatable and moist form. Allergic reactions are a complex issue and the problem may often be a combination of triggers and reactions, so the solution is a multiple of various factors; from good management, good observance and knowledge of the horse, removing obvious potential triggers and providing assistance to reduce symptoms, improving the health and the immune response to help the horse challenge the antigens.

It is important to keep trying, rarely is there a silver bullet one off solution. Once a horse has become vulnerable it is then likely that it may always be reactive to other antigens. Primarily good management, working with the target of creating a healthy horse by providing a balanced diet in a healthy environment, being quick to rest the horse when signs of virus or infection arise, maintaining a regular pattern of working and feeding and being watchful for changes, will all help to prevent the onset of allergic reactions.