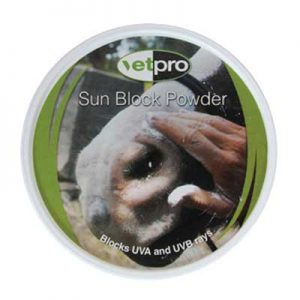 The Positive Effects of Sunlight on Horses 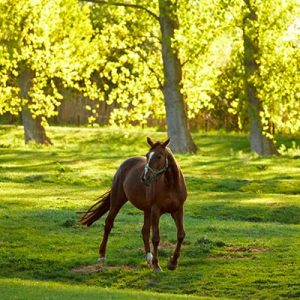 The physical positive effect of sunlight is the effect it has on the oils in the skin and that is the conversion to Vitamin D. This vitamin is fat soluble which means it can be stored by the horse. Daily exposure to light (and it doesn’t have to be bright sunlight cloudy days will work) usually provides all the Vitamin D required by the horse. The rate is improved by uncovered exposure to bright sunlight, but 5-8 hours on a cloudy day with a rug on will be sufficient. Some chemicals in fly repellents and coat conditioners will reduce the effect but these tend to be used in Summer when the sunlight is more effective.

Vitamin D has two origins, D3 is a hormone that is found in animals and increases blood calcium levels. Vitamin D2 is found in plants, again from the effect of sunlight, and is ingested by the grazing horse and so is a secondary source. Note though that hay (unless it is sun cured Lucerne hay), has little Vitamin D, it needs to be provided by green pasture. Once inside the horse they both have the same physiological effect of maintaining correct blood calcium levels.

Vitamin D deficiency is uncommon in New Zealand with its clear light, but can occur in stabled horses that have little or no access to light and pasture. Sometimes too frequent washing down with chemical soaps can wash away too much oil which is the prime source. When considering supplementing be aware that there is a toxic level with an upper limit of 3300 iu per day. Sunlight will never create a toxic level as the process only makes as much Vitamin D as is needed, so better to let the natural way of light produce the required amount for the horse.

The Negative Effects of Sun on Equine Skin

The negative effects of sun on human skin is well known here in New Zealand but what about your horse. Horses with white areas, blazes legs and ears, also chestnut horses particularly their heel areas, are definitely subjected to sunburn and need protection from the UVA and UVB rays of the sun. UVA are short wave ultraviolet and UVB are long wave ultraviolet rays. Both will cause soreness, redness and discomfort but it can then progress to blistering and an oozing discharge that will need veterinary attention. However even mild sunburn that is repeated can cause damage that will create long term problems, the skin can become thick and scaling appears on the surface (known as keratosis), this in turn may transform to a squamous cell carcinoma (skin cancer).

The exposure to ultraviolet light can have negative effects on the immune systems of the skin, this is why horses with white legs often tend to suffer with problems with infection like mud fever from dermatophilosis or bacterial follicitus. Once established these problems become repetitive as the horse’s ability to challenge the infections is reduced because of the lowered immune response. It is advantageous to continue use of a sun block on the legs, particularly the heel area, throughout the year. This will assist the skin to resist breaking down which is the opportunity for the germs to enter and create the problem know as mud fever.

Apart from normal sunburn there is a condition called photosensitisation, it is where even lightly pigmented (not just white) skin reacts abnormally to ultraviolet light and results in photodermatitis. Triggers for this can arise from exposure to a chemical that may create the skin to be more sensitive to UV light. These can be chemical based fly sprays, some coat conditioners some dyes and some drugs such as some antibiotics and tranquilisers.

Another source of photosensitisation is from some plants and weeds that are digested by the horse as they produce reactive compounds called photosensitisers or photodynamic agents which flow through to the skin and create greater sensitivity in the skin. These can be in some clovers, cow parsley, comfrey, St. John’s wort. Even contact with common buttercups can cause a localised irritation and sensitivity on the muzzle.

This condition can also be seen as a side effect of severe liver damage, as a poorly functioning liver doesn’t process chlorophyll efficiently resulting in phylloerythrin in the tissues of the horse. Liver damage can have varied causes but one is the ingestion of ragwort when it has been dried such as hay cut from an infested paddock.

First of all, dealing with a healthy horse that has white skin such as muzzle and legs is relatively easy as a sunblock that is practical and long lasting will provide protection from sunburn. It is important not to wait until there are signs such as redness, but to start using it as the light levels intensify in late Spring. Attention should be paid to areas like heels which are not the most obvious points but nevertheless can become sore and irritated.

Masks are useful but can slip aside unnoticed when the horse is out grazing open pasture. The masks require attachment to a halter and this is often not satisfactory as the horse can become hooked up by a halter and other horses tend to grab on to it. Long term halter wearing can result in rubs and sores.

Use of human sun creams is neither practical or effective, most human creams do not block UVB rays and they just act like filters not total blocks and after a short time they are absorbed into the skin and have to be reapplied. That is not so practical for a horse who spends many hours in a sunny paddock. A block that lays on top of the skin and doesn’t get absorbed or rubbed off is the answer. Human creams were developed because they are invisible as people don’t like wearing a white cover on their faces and other areas, but of course the horse doesn’t mind what he looks like!

A sticky cream is not easy to apply to horses who generally don’t like their noses being touched, and especially more so if they have been exposed to sun and are becoming sore.

Vetpro have developed a powder that is a total UVA and UVB block, long lasting as it doesn’t wash off in the water trough, non-sticky and so easy to apply the horse doesn’t notice.

This requires more focussed management. As well as using a total UVA/UVB block, attention must be paid to improving the horse’s general health by providing a balanced diet with minerals, good pasture with shade. Weedy pasture and weedy hay may well be a trigger so remove weeds even excessive clover and improve the quality of the pasture. If possible provide a covered yard or a stable for the horse in the sunniest part of the day. Take care when using chemicals especially on the white or lightly pigmented areas of the horse. Any signs of sickness – liver damage- must be referred to a veterinarian.

CHECK THIS MONTH'S PRIZE
We use cookies to ensure that we give you the best experience on our website. If you continue to use this site we will assume that you are happy with it.Ok