It is tragic when the mare dies during or soon after foaling. However with veterinary assistance and good care it is possible to successfully raise an orphan foal. Here are some notes that may be of assistance to you. 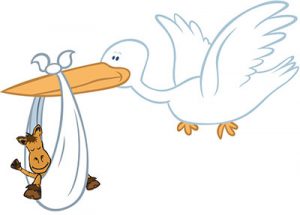 Firstly clean and dry the foal and keep warm, cover if necessary from extreme weather conditions. The foal should be on its feet within the first hour of birth. First concern to deal with is whether the foal has suckled and therefore received colostrum. Colostrum is absolutely necessary and, if the mare has provided none, should be fed in a sterilised bottle within the first hour but no longer than 4 hours from birth. This is the first milk a mare produces and contains antibodies which protect the foal from viruses, bacteria and diseases in the early part of its life. It may be possible to milk the mare if death was not from disease or infection; this can be done for up to four hours after death. Otherwise contact a local stud or your veterinarian to obtain some frozen colostrums. If the foal will not suckle the bottle then call the veterinarian who will need to stomach tube the colostrum. All foals should receive a minimum of 1500 – 2000mLs (2500 mLs for larger foals) of colostrum within the first 8 hours after birth. If using frozen colostrum, thaw only in warm (38C) water. It is important to have your veterinarian check the foal’s IgG levels at 24 hours to confirm adequate uptake of colostrum antibodies. Do not give water or any Foalmilk or substitute until after the colostrums have been given.

Call the local studs or a foster mare association or even the local radio station to see if a foster mare can be arranged, one who has just lost a foal. If a mare is not available then a substitute for mare’s milk must be fed to the foal.

Check that the foal passes meconium within 8 hours of birth. Natural colostrum is very laxative so artificially fed foals need to be watched closely. Meconium is the dark pellet first droppings, if after 8-12 hours and you are in doubt as to whether it has passed, or if the foal is looking distressed and continues to strain (even though some may have passed ), call the veterinarian without hesitation.

Keep a watch on the temperature, pulse and respiration each day. At birth the pulse is 80 beats per minute rising to 140, then reducing to 100 which is the norm. Temperature is 37.5 degrees C, respiration 30-40 per minute. Any changes should be noted and a call to the veterinarian made.

If diarrhoea occurs (scouring), take the temperature three times daily and notify the veterinarian if it increases. Scouring may be due to too large a feed at any one time, or too concentrated. It can be due to infection also and the veterinarian will be needed. From 3 weeks of age introduce hay and hard feed, there are premixed foal feeds available, or you can make up one from the details given in the Vetpro Foalmilk instruction leaflet. Make the introduction of hard feed gradual.

What and How to Feed 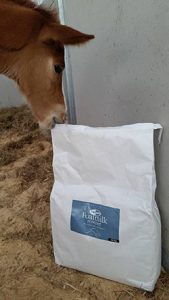 All bottles, buckets and any equipment used with mixing and feeding must be absolutely clean and kept in a sterile fluid. Sterilising tablets are included with the pack, along with a teat. Mix the powder with water as per the instructions provided. If the foal is having difficulty accepting the bottle, put the foal’s head under your armpit and keep your hand under it’s chin, keep the bottle angled slightly up to prevent air being sucked in. Remember orphan foals are high risk when it comes to gastric ulcers and post-partum infections so a foal that has trouble taking a bottle may in fact suffering from one of these problems. If in doubt call your veterinarian.

Once any opportunity for a foster mare has passed start introducing the foal to drinking Foalmilk from a bucket. This should have happened after three weeks. Water should always be available also.

How Much Does a Foal Need

During the first 2 days a normal foal will suckle from its mother 6-8 times an hour throughout the day. Depending on its birth weight it will drink approximately 300mls/hour or 6-7 litres a day. To mimic the natural loading of the stomach it is recommended that orphan foals receive frequent small feeds (24 per 24 hours) especially during the first 48 hours. This hourly bottle feeding should be continued for the first 3- 4 days. From day 4 onwards, two hourly bottle feeds are acceptable. By day 7 the foal should be able to go through the night on 4 hourly feeds (although this is not ideal for the foal, it does allow you to get some sleep). From 3 weeks of age an orphan foal can be bucket fed 6 times a day (4 hourly).

During the first 48 hours a foal should drink 10-15% of its bodyweight per day. In practical terms this means that a foal weighing 50kg at birth should receive 5-7.5 litres over a 24 hour period, this would be for a foal with an expectation of an average mature size of around 500 Kg, say 16.1 hh.

From 2 days of age the same foal should drink 20% of its bodyweight from which it should gain between 1-1.5kg bodyweight per day. This means that an extra 200-300mls of Foalmilk Replacer should be fed each day to allow for the increase in bodyweight.

During the first week no more than 500mls should be given at any one feed as over-feeding may cause diarrhoea.

Day 3 Onwards: To calculate the daily Foalmilk Replacer requirement, weigh your foal and feed 20% of its body weight at the recommended frequency. Increase Foalmilk Replacer by 200-300mls per day to allow for daily weight gain so for example after 7 days the total becomes 8-8.5 litres per day for the average foal

From 3 weeks of age, orphan foals will start to eat hay and hard feed. There are pre-mixed foal feeds available, or you can make up one from the details in the Vetpro Foalmilk instruction leaflet. Make the introduction of hard feed gradually; reducing